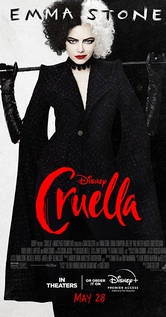 click to enlarge
Estella is a young and clever grifter who`s determined to make a name for herself in the fashion world. She befriends fashion legend Baroness von Hellman, and embraces her wicked side to become the raucous and revenge-bent Cruella.